Skip to content
I wrote earlier about my view of compounding in the fund and how it is really about income streams. By chance I had decided to re-look at long term burner virtual portfolio I set to fire & forget and see what happened.
About 18 months ago I started to think about how I would structure my pension funds when I come to crystallising it and what I wanted the funds to do. As a result of starting this I ended up looking at different asset strategies, what different individuals posted and started looking at how I might run things.
One thing I did know, was that a part of the funds I wanted to be predominantly income generating but with a decent likelihood of some growth. Lots of sectors available, but some research I did 2 years ago for a talk I was giving led me to really take more of a look at renewables.
I am not going to explain in detail how I arrived at the four funds I detail below –  some guesswork, some analysis, some taking a view of risk, but rather brush over some salient points and look at the performance. The point to make goes back to my earlier post on compounding – its about future resilient income streams and not about capital growth.
To cut the story short I ended up putting four stocks into a virtual portfolio:
Between them they have a decent spread of solar and wind assets across the UK and a cluster in the south of France. Some decent if a bit erratic at times growth, and certainly do not seem on the most loved list of many – not very sexy holdings. They currently have varying degrees of stability and financial status All have an SP currently at a premium to NAV and are low to medium risk and seen as cash generative with dividend policies of increasing the pay-out largely in line with inflation.
Note to the wise –  none of this means change could not happen, significant costs suddenly arise (large amounts of regulatory changes can have big impacts). Any investment decision you make is yours alone and in no way do I recommend any of these holdings –  DYOR.
So anyway, I took a look at what has happened in the past 18 months and then extrapolated a bit out another 5 years: remember my earlier post on basic simulation … no need to be fancy, just create the picture.
To make things just a bit simpler I have made some assumptions: yield stays the same and SP rises 1.2% pa (very conservative); re-investment costs are 0.5% (tax) and £12 transaction); SP used is the close price (just more of a phaff to sort a spread out and really this is about a bigger picture). A couple of figure are in yellow as they are declared but not paid so just assumed the SP remains the same. Total investment was £10K in each (so a £40K lump).
So a really simple fire and forget arrangement….

So the simple spreadsheet just detailed holding at start, dividends paid, the price at the time and computes value and in the case of reinvestment (below) the new holding. Just a vary basic and simple extrapolation out 5 years after that.

The first thing to observe is that the income stream does go up, but very slowly (and almost certainly not in line with inflation: remember I chose a very conservative growth rate). In reality the whole portfolio is acting closer to how a bond fund would feel with a relatively static outflow of cash and a very modest upward (usually) trend in the holding value.
In nearly every respect this strategy will loose money in the long run due to costs and inflation, but will provide a stable (if not reducing) income stream.
Just remember – this may very well be acceptable: you can’t take it all with you and just having a decent income plan might be enough for you. I really dislike the pundits who constantly bang on about ‘maintaining capital’ .. what they really mean is ‘maintaining their active fees’.

Now lets compound a bit and assume that for this duration all dividend payments are re-invested.

Same spreadsheet but you will see the line item ‘bought’ showing the new stock purchased.

What is immediately striking are three things:
In other words, re-investing has geared the capital – the SP increase of circa 10% vs the income generated increased by almost 60%. 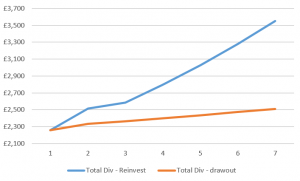 To put this more into context (ignoring NPV of div cash flow for simplicity), if I don’t re-invest and simply take the income I end up with a total return of around 5.9% (that’s the capital end value + the income received) annualised but in just capital 0.9% and an income stream of approx 6.3% of my original capital – i.e. very flat
However, if I re-invest then my total return is 7.6% annualised. Does not sound a lot, but look at the numbers. The  available income stream is 8.9% of original capital – just think if I ran out another 5 years !

NPV is a very useful accounting concept and there is some substantial and complex ways of calculating future cash flows and relative values. Its all dull as dishwater really and for a home PI, just not needed. Although I do use some complex discounted cash flow models, for the most part I just take a really basic approach …. KISS (Keep It Simple Stupid !)
A basic way to compute NPV is to assume the value goes down by inflation every year. So starting with 100% and inflation of 2% at the end of year 1 we have a real terms value of 0.980. In plain English, my buying power in a years time is 98p if I started with £1.00. Similarly if the rate was say 3.5%, at the end of year 1 my £1.00 would be worth £0.965 then £0.931 the following year. It is crude but as they say, ‘close enough’.
What NPV tells us is that the real value of money goes down in time relative to where we start. This is why growth is so important….. even if its only at inflation. This is why governments need inflation, because it erodes the real value of national debt over time allowing it to be paid down.
If I assume inflation is 2% pa (around UK target) then the NPV of the capital is 87.7% of its original value after 6.5 years:
With no reinvestment the income stream is lower in real terms by 2.5% (£2,507 * 87.7% = £2,198) and the capital by 7% (£42,474 * 87.7% = £37,247)… just like a bond structure would likely give you.
But re-invested, my income stream is 38% higher in real terms (£3,553 * 87.7% = £3,116) and my capital value by 41% (£64,384 * 87.7% = £56,461)
This is why for me, in terms of my fund planning, compounding is all about increased income streams. After all, after 59 (an arbitrary age point at this stage) should I start taking the income then the SP could drop around 50% and I would still be getting the same income as if I had not re-invested – that is some headroom !
Just to emphasise the point, here is a graph showing an initial investment of £10K (capital on left index, income on right), with growth and Yield Growth of 1.2%pa and inflation at 2% (that is essentially a very low risk fund – almost a bond in nature). Two sets of data adjusted for real value (NPV). 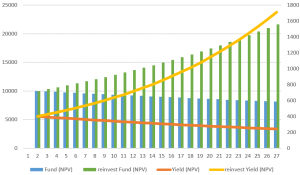 How graphic to show the effect of long term compounding on low growth, high yield funds: re-investment for a number of years gives you a higher capital base and higher real term income stream.
Now clearly if the SP’s rise higher (either more assets in these fund holdings or a greater premium), then the number of shares reinvested will be lower … but the total value will be higher.
======
Really, this was just a very opportune look at a long term project that re-enforces by views on compounding. Perhaps look at some unloved shares or funds, with low costs, low(ish) risks, stable long term decent yield and then compound away for 10, 15, 20 years… just do the maths. It is no where near as complicated as you might think.
One final point for those tempted to point to an obvious flaw…. if I picked higher growth holdings with lower yields I may well end up with a lot more capital….. true, but I also take higher risk and volatility. In the end, my ultimate portfolio’s will reflect a range from the lower risk stable income to some Emerging market type areas. Just pointing out that if you are a bit risk averse, not having the time for highly detailed and active investment, then looking at some good yield, low cost options and re-investing can deliver a decent return in time at much lower risk and stress, and might very well meet or beat the market average over time. Active management has high cost and does not always deliver superior returns. The tortoise & Hare come to mind –  slow and steady often delivers what you need with a lot less risk and an lot less stress and has the added benefit of not taking up valuable retirement time chasing the shadows of high returns.
Compounding = higher real term income stream