Skip to content
My brother has just been made redundant and asked for a pension statement as he can legally take his pension now (albeit at a reduced rate). A basic 2 option statement has been sent, but it does miss a key factor which for a legal document is a bit concerning.
In short, he can take a pension now of £8,500 or a reduced pension of £6,500 with a lump of £44k.
[Note I have changed numbers for this exploration but kept the relative scale]. 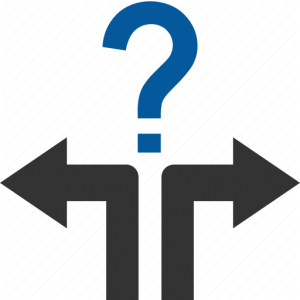 The bit that is missing is if he did not take anything what would be the projection in 12 years (when he can access the full lot. I suspect is is somewhere between 50% and 70% higher as I have seen similar company scheme data… but they do all vary.
So how to work out the best solution ?
There is an adage that cash in hand is worth more than a future promise …. this is especially true in my view as financial institutions have a long history of changing goalposts and screwing over people though mismanagement and darned right mischief.
We had a very similar decision to make a year ago when my wife had the same dilemma. So in one sense, I already know the answer, but seeing a seemingly similar decision point twice in a year is not coincidence. There must be a lot more people who face this, so I thought I would just walk through the how and why so to speak.
A year ago when looking at my wife’s early pension option, even with the very generous indexing of her BMW pension it was crystal clear that taking the lump and reduced pension was the best option for us. In our circumstance, we had other means, did not need the higher cash flow and felt a lump sum would suit our plans better. For others, it is the balance of cash flow over lump sum that needs to be explored and understood.
But lets assume that both options are viable for his lifestyle needs. How can we work out which is the better choice ?
Well we can list out the future payments of both with an assumption on the indexing (likely around inflation in his case) and then add the numbers. Clearly option 1 (the full amount) will always win as the numbers are bigger.
Just looking at the payments indexed at a fixed 2% pa (likely a general inflation adjustment made) we can clearly see there is no case that a reduced cash flow is better. It is just self evident. But does this mean the Lower Rate is always bad ? 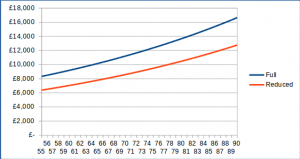 But this ignores the lump all together and much more importantly the future cash flow that the lump can create. It also ignores the fact that the lump can be invested and grow at a higher rate than a gilt invested defined benefit scheme.
So we could assume a return and growth rate for the lump and add it to the cumulative summation and see where it all crosses.

Well, if we look cumulatively and include the value of the Lump sum (growing at a modest 1.5% above inflation) we get a different picture. In all circumstances the higher value is to take the lump and reduced payment ? 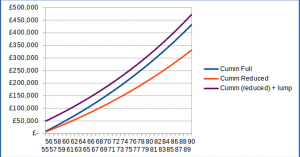 It is a simple task to run a variety of scenarios around this varying inflation, Lump sum returns etc, but essentially it will just show the same relative differences. The spread will only vary depending you your personal view of returns, inflation and risk.
I could take a different scheme … that of taking money out of the lump (invested in relatively low risk areas like bonds) to make up the cash flow loss relative to the higher payment. When would the fund run out ? Well in the simple scenario I chose around 80 years old (ie 25 years, Lump is on the right hand scale). 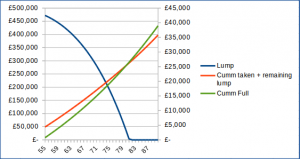 This could be a good option if he needs a higher relative cash flow for the 12 years until he gets his state pension.

I could play a few games of ‘what-if’. For example, suppose he takes the lump and invests it in balanced type investments (risk 4-5 range on the morningstar 1-9 scale), and we get a market correction – well lets see ….. If I assume a 40% correction in 5 years time (say), the fund now runs out aged 71. But this is well after his state pension kicks in so would not need it anyway. 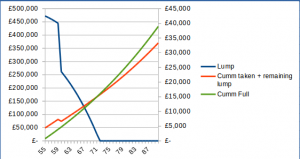 So why do pension companies off this carrot and dress it up as attractive. On basic numbers, unless you actually need the additional cash-flow, it seems pretty obvious that for the most part, taking the lump sum and reduced pension are better options in terms of total return. Yes, if you take money out of the fund to ‘top up’ the cash flow level there is a trade off point down the road, but its a free choice and one you do not have if just getting a fixed payment. You also crucially have the money in your possession so are free to make choices.
So why would a pension company do this. It seems obvious that a carrot is being dangled… just big enough for the savvy to see there is a material benefit long term, and enough to peek someone’s interest if they fancy a round the world cruise. But surely if they themselves kept the lump (or offered a much lower one) they could more materially benefit  from investment and compounding effects ?
Well, probably not. Just as ‘cash is king’ to us, ‘reduced risk is king’ to a pension company. The lump is a fraction of the accrued net asset values (NAV) of your part of the overall fund. By liquidating a lump and handing it over, they then have a much reduced future liability, and crucially increase their NAV to Liability ratio making them financially stronger. Yes, it is small beer but as a well known UK supermarket likes to say … ‘every little helps’
Consider that currently an annuity rate aged 55, indexed gives a rate no better than 2%. The difference in the full vs reduced payment is circa £2K. This suggests at a simplified level, a total fund of £100K is needed to generate that return. (It is more as future losses/gains have to be factored in and some other things but broadly it is a clear way to think about it and show the example). So by giving circa £44K out (44% of that basic interpretation of the necessary fund), they reduce the future fund liability by more than the £56K difference (lots of reasons why it would likely be north of £75K and more critically reduce their exposure to market risk in generating the additional cash flow. This is why a seemingly attractive lump is offered, and the company studiously neglects to tell you how much is really should be to be a fair reflection of assets.
—
Just as an obvious view, there seems no case where taking the higher payment generates a better total return. There are undoubtedly many schemes, many strategies and scenarios that ‘could’ play out. But anyone faced with a similar set of choices might want to consider:

Don’t be put off in working it out. I personally don’t think anyone needs expensive ‘advice’ when it is so easy to walk through the various outcomes on a spreadsheet and decide for yourself.

Note:
None of the above constitutes investment or pension advice. I have simply written about my analysis of a personal situation and offered a conclusion. Always do your own research and analysis.