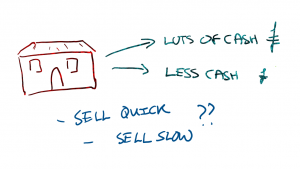 I just sold my late mums house in 9 days for nearly about £30k less than I could have made … am I mad ?

It is always a chore and slow to wind up someone’s estate. Even though my mum had a simple estate and everything in line (I know as I looked after her finances) it just takes an age. The biggest challenge and stress is selling the house though as we (sellers) are never in control.

That is, we are not in control in England as the buyers have all the cards. In Scotland there is a different legal system so an offer made and accepted is a partial contract giving a liability (I think it is 10%) against any party pulling out …. boy would that have been handy.

Now mum lived in a simple 2 bed bungalow in a nice quiet part of town close to the outskirts and fields. An idea retirement place that I rather forced her to buy when dad died. The house she and dad had lived in for 33 years was both too big for her and every single thing held a memory of her and dad’s life. You could just feel the inner sadness at every triggered memory. So my brother & I contrived a plan to get her out so she could build fresh memories.

Some resistance, a few home truths and finally when done, mum was very happy and glad she moved … result !

So … the Context of the Sell

The situation I found myself in 2 weeks ago, well here is the chronology:

… this is where is started to go wrong !! Seems no one verified how long the trust fund would take to release the money (despite my questions). They told me ‘straight after’ as that is what they thought but did not know – lazy estate agents for you

Can anyone spot why the English system is so bad !

So despite selling within a few days of each time going onto market, despite there being no issues at all with the house…. events rather conspired. And worse, the UK furlough system ends shortly, an army of people are about to loose their jobs, businesses are crashing all over and no one wants to move unless they have to. So I was faced with a few realities:

So lots of negatives, lots of liabilities and a very uncertain sale point. In parallel to this we had arranged our finances in anticipation of completion, so to unwind that and re-start putting the pension fund withdrawals back on was a phaff I really did not want.

…. I wonder if I could sell to a Quick Move agent ?

(These are companies that buy almost anything but at a discount to fair market value. The discount ranges depending on the company, market and how ‘sharp’ they are from 60% to 85% of fair value with a typical price being in the mid to high 70%’s)

So … a bit of web research, some reviews read and a look at Companies House into the company financials and history and very quickly settled on one company. They had been in business for over 20 years, solid track record.

The whole process could only have been quicker if their surveyor had not been so busy. From initial enquiry to cash in my bank was 10 days (and could easily have been 4 or 5).

But really … was I mad, desperate or shrewd ?

There are really 3 options available 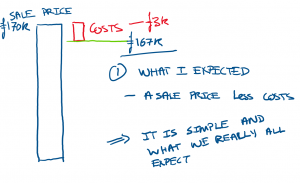 Clearly this is not happening. The time wasting chump with his daughters trust fund rather scuppered it all really.

2. Sell very slowly in a normal but subdued market

This is the most probable option if I just left things. 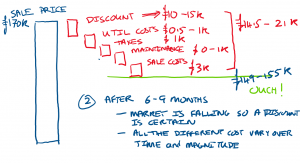 This option it takes months to sell. No one buys a house in the UK really much from November to March and the type of house is really a retirement home. People of that age move only if they have too and a pandemic with economic turmoil would not be high on the list. So I can expect costs like the Utilities, Taxes, any Maintenance and insurance etc. I can also expect that in a depressed market a much lower offer and achievable price.

3. Sell to a quick move agent in a few days 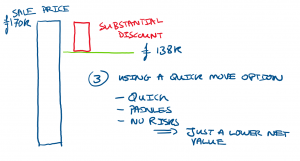 Wow .. what an apparent financial hit .. but over in days ! 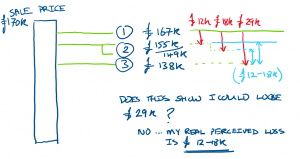 Now option (1) is dead. It just is not realistically gonna happen, so really it is the variable difference of time and some costs that determines the effective cash difference over the next 6-9 months. I estimated the difference to range from £12k to £21K.

Note also I say ‘Perceived’ Loss. It is an illusion to think I (or you) loose anything. You never had it in the first place and this is the biggest lesson in this. The focus some have on what they see as getting a few quid more is just barking mad.

What I really should be saying is that my risk is up to £21K over a 6-9 month time frame and how much is that risk worth to me ?

So the way I looked at it was this: 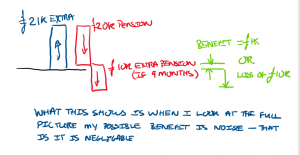 As can easily be seen, option (2) gives at best a cost neutral position and at worse at least a £10K deficit position and all for what.. a lot of stress, worry, travel back and forth long distance and the rest.

This really was a 10 second decision !

There is more Icing on the cake

I have an investment that is about to pop and really wanted to buy more stock. So within 10 mins of receiving the funds, I had put the max (£40k) into our ISA’s and bought … the bubbling is getting louder and as I write, The value of that £40k has increased 31% in less than 4 days. It will not really be long until the paper loss is covered.

So I win both ways –  No stress de-risking my liabilities and outgoings, and I make up the paper loss quickly… winner winner chicken dinner for two please !

Lessons by looking at the Bigger Picture

Far too many people focus on one immediate transaction. They forget that financial decision making is about a portfolio of possible outcomes.

The more illiquid an asset is, the bigger the discount to perceived value you need to consider. It is no good thinking you live is a £400k house if you need the cash quickly you might only get £350K.

Say you had a car you felt you sell for £10K. You needed a quick sale to pay for something else. Do you hang on or accept £9k. On paper it looks like you loose 10%, but this is an illusion – you never had it in the first place. Is £1K even significant or just noise and pride.

Your choice is to accept the lower price because you value something else more, assess the price of the risk as too high, or hang on and see but with no guarantee you would achieve what you perceive as the true value.

I would offer this maxims based on my experience