I recently went over our spending and budget for the year. One of the things I put down was a reduced estimate of cash use (£125 pcm, so £1,500 over the year), but in just updating Feb figures I can see no cash usage so I started to think – is this a permanent change ? 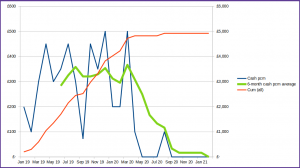 As can bee seen, there is a relatively steady use of a little over £300 on average right up to the March 20 Covid lock-down. I used some pretty regularly as one of the village pubs did not do tabs so a plastic tap every pint was I felt a pain. A few coffee’s here and there, but the majority was her ladyship shopping mostly with her mum. They both like the market and getting fresh stuff from the places they have been going for years.

Covid lock-down of course meant no market, no pub, no doing much and most shops rather preferring cashless. In fact our local village fish & chip shop cause a bit of local uproar by saying ‘cashless only’.

Then of course there is the steady and seemingly unstoppable decline of local banks. Our nearest bank (of any kind) is 9 miles away now and essentially the local ‘bank’ has become the village shop who whilst still using cash would rather not do. They do cash-back and that has so far been enough for many.

But as markets closed, we pretty much kept shopping bills as much as possible below £45 (the contactless limit) we never needed to touch anything other than the food we put in our trolley. The shops all have sanitisation so a wipe in and out is all that is needed.

So what since March 20, well as can be seen, our cash usage has massively dropped and in 10 months only £100 has actually been taken out.

At home we have a bit of cash. My mother died not long after lock-down started and in disposing of her things, many donated and given new homes to people who needed, but also, a fair few things sold for relatively small but cumulative sums. This paid for a lot of the meals out for a joint holiday last August with my brother and we did not scrimp. There is a couple of hundred or so left sat in my drawer. Her ladyship has a hobby doing sewing repairs and embroidery so makes small sums (She says it pays for her machine upgrades and gaggle weekends away but somehow I always seem to pay … mmmmhhh !).

Between us, we probably have enough actual cash in the house to pay for shopping and car fuel for a month or two if needed. A handy buffer if there is a banking issue from a cyber attack.

But really, I just don’t see why we would go back to using much cash at all. Our usage is a few pounds a month at most and even unlocked I cannot see the local fruit & veg market not being cashless.

So is this really a problem ?

Well, for us no, but I do wonder that many particularly older people really find it difficult. I also worry that debt will become even more normal as it is all just a piece of plastic and kids are essentially not learning to handle money.

The recent and very rapid rise of Crypto (particularly Bitcoin) has made me think a bit more about cash and money. Not making a comment on crypto aside from (1) I don’t have any and (2) I have no plans to – it is a not asset but an uncontrolled, unregulated bubble. Want to see what that really looks like, then look up the ‘Tulepmaine’ (Tulip Bubble) of the mid 1700’s.

—
Brave new world coming … and it is very likely cashless.