Skip to content
Some years ago I learned to fly a Gyrocopter. I did after a long while let the licence lapse so would have to re-qualify (not that onerous as it never really leaves you). My wife is not so keep and would rather I planned in retirement to get a fixed wing (looking at a Zenith Cruzer build), although I must say I do have the odd twitch to fly a gyro again.
What is a gyrocopter ?  Well they have moved on and become largely factory built now an not random home builds, but the tag-line ‘motorbike of the sky’ rather summed them up. Think of Little Nellie in the James Bond film You only Live Twice.
Going back to the time just after I learned, a chap called Norman Surplus who had beaten bowel cancer (with a 40% and 2 year survival timeframe) and decided to learn to fly a Gyro. He went on to try and circumnavigate the globe and become the first Gyro to do this because he viewed he had been given a second chance and should just go out and live life. He did not make it as some countries (notably Japan) did not have any mechanism to recognise the aircraft type and also there were issues with China. He did however get way further than anyone else including some very long sea crossings in the North Atlantic…. not bad for a Rotax 912 powered draggy little machine doing 70mph, and vey gutsy as an engine failure over water has low odds of survival (even with an immersion suit).
Fast forward to this year, and a serial adventurer (James Ketchell) having caught the Gyro-grin. This is the name given to the grin everyone who goes up in one comes back the first time with … sooooo much fun. He has single handedly rowed the atlantic, cycled round the world, climbed everest etc… and he decided to fly round the world in his Gyro. (Yes the route is well in the northern hemisphere (whereas Normans was right round the globe N-S, E-W), but non the less, a heck of an achievement if he pulls it off.
And low and behold, Norman had been planning to try and finish his trip and set off a few days ago. Both round the world attemptees plan to meet up in Estonia in a few days and fly part of Russia together. That will be so awesome !
Follow thier progress with live tacking
James Ketchell – flying a Magni M16 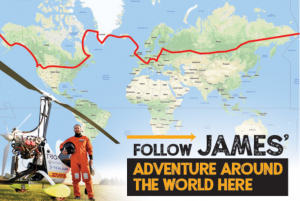 Norman Surplus – Flying an original MT03 (the version I learned on) 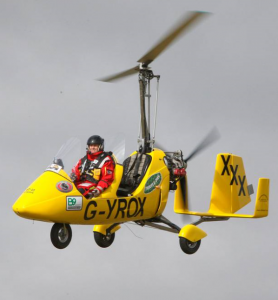 Why say all this ?
Well a little while ago I started to look at a Personal Investment Policy (PIP) A somewhat ongoing process I think might take many months, and I started thinking that mere bucket lists of things to do and places to see is not really in the spirit of FIRE. Yes, its about ‘doing stuff’ or ‘seeing stuff’, but is it really FIRE ?
The FI/FIRE ‘movement’ (if you want to call it that) fundamentally is about looking at what we really need, and ergo what we can save/invest to give us a point in time to either stop paid work entirely and retire, or remove ourselves from the 9-5 rat race and work only on what we enjoy, what we value, what we want to do and when we want to do it.
1. FIRE takes financial planning – we simply cannot achieve the goals without some structure. It is not a save and forget process
2. FIRE takes discipline – there is always something else to spend money on. Having that discipline to achieve our financial goals is what drives the process
3. FIRE means compromise – we cannot do everything. From the people downsizing, or selling up and renting to lump invest to those choosing to live or eat differently, we must compromise on what we did before to achieve those goals
4. FIRE means re-appraising our personal values – most important, our attitudes to life and other people will change. We fundamentally must learn to approach life differently and as such must evolve our personal values and morality (hopefully for the considerable better).
So why is it we think a ‘bucket list’ is the answer to future activities ?
This question really only occurred to me a couple of days ago. I took a look at the scribbles we have made on places to see, things to do and realised we don’t actually have a plan, we have a list. My fellow gyronaughts do. They have a dream and planned how to achieve it and on the way looked forward to many an adventure.
So many of the postings about on FIRE are about process, about squeezing the extra bit of cash out of something, of little side hustle ideas. It is all just chasing the dragon of cash is king. So little is about looking to why we strive for that extra time in life.
So along side my slowly putting a detailed PIP together, I have decided to also look at the bucket items and start thinking about a real plan ? It is not enough to generate a list. There is, I believe, an addition to the four FIRE maxims above:
5. FIRE means planning to enjoy life –  its an active process and not just a list.
How has anyone else gone about this ? – I surely cannot be the first to come to this conclusion ?