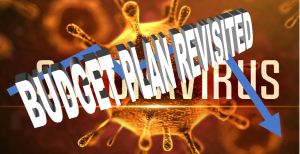 In January I looked back at last year and drew up some reflections and personal lessons to improve prediction. Well, with Covid-19 that went well !

There is no point being all annoyed about it. Time to revisit, see what I can reasonably adjust and foresee and look at where that leaves us  – remember, the markets (and with them our investments) have tanked ! There is a silver lining likely later in the year at least financially due to a likely inheritance, but that aside, I thought I would look at the budget plan, income plan (ie what I needed to take from my funds), perhaps make some adjustments and see where that leaves us.

So the first thing is to look at the breakdown of monthly spend predicted and just see what now is either no longer applicable or just cannot happen: 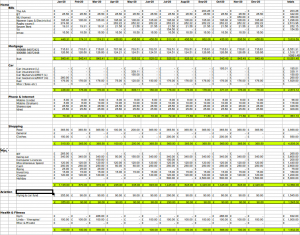 The detail is for us each to fill in, but just to get the idea. Now for the variance I can reasonably foresee:

And now to look at the summary bigger picture: 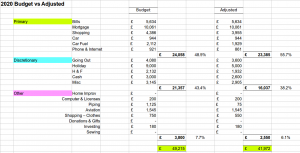 So around £7.25k less . Very nice, but what is the make up. Well, mostly (and predictably) it is a lower spend on future holidays. Clearly we cannot go anywhere right now, and it may well be the Autumn before we can safely go anywhere. The rest is made up a a wider range, like lower fuel costs for the cars, Lower mortgage costs as the interest rates dropped (now a ridiculous 0.76% for us !), No going out to restaurants, less need for incidental cash, a large chunk not on ‘Piping’ as pretty well the whole competition season is now gone. It is sightly surprising how much it adds up, but equally, not that surprising how much flex there is. In January I looked at what I could flex sharply, so no real surprises.

More noticeably is the general breakdown between Primary, Discretionary and Other Spend. My original budget had Primary as 48.9%, Discretionary as 43.4% and Other as 7.7%. Now the new Budget has 55.7%, 38.2% and 6.1% respectively.

As expected, the Primary spend has changed little reducing by 2.8%. The Discretionary however has dropped by almost 25% and Other by almost 33%.

My ‘flex plan’ is working ! ….. and I have not really sacrificed much, just lowered a couple of priorities. Remember the conclusion I came to in January:

So How does it all look now to the end of the year: 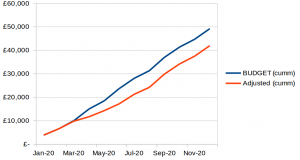 Looks fine, but what about how much I need to withdraw from my pension fund (remember, it has taken a battering) ?

Well the first thing, is that I can take a softer view on holding my working reserve. In December of last year I had a look at what size of cash reserve (bucket if you like) I would reasonably need. I came to the conclusion that I needed a range of between £5K and £7K. However, in looking forward to next March (The next 12 months), I know I should be getting a modest inheritance latter in the year. So in this time where I want to minimise how much I take out to allow better fund recovery, I can take a view on running the reserve down at the end of the year know I can easily refill it if I need to.  So my adjusted End of Month (EOM) Cash Balance for the next 12 months becomes:

This lower requirement and wider ‘flex’ allows me to plan to take less out of my Pension fund and a bit later in the year as well. So my net requirement now becomes: 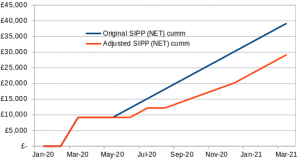 In shear financial terms it amounts to taking £10K (net) out allowing more growth. And just looking, I could probably reduce it by another £5K if I really chose to: again, my flex-plan.

So Overall, no great surprises. I have a cash-flow model I know is fairly accurate. Pretty well all my bigger spend items are all costed in and I have the luxury of knowing I don’t ‘need’ to do much. The severe correction we are in the midst of will have an impact, but not a big one for me. I will look later in the year perhaps as we come out of the major Covid-19 lock-down on investment and withdrawal plans. But as I have already looked at, there should be no big drama’s. A couple of big projects needing a lot of money may be put on hold, but that is life… no drama’s.

If you have a budget plan, understand you cash-flow need,  see where you can flex it and have whatever cash reserve works for you, then this is a hiccup. Maybe a big one, not non the less, nothing to panic over.