Back in February I wrote about the effect of Covid on us and reflected that we had essentially gone cashless. Since then I made a conscious effort to think about cash and did feel as we started to unlock from March we would use more.

Could not have been more wrong.

My wife does a lot of sewing, repairs stuff for people and invariably gets paid for it in cash although increasingly by bank transfer – everyone else is going cashless it seems. This just goes in her ‘stash’ to pay for her sewing weekends with her sewing girlfriends …. well .. it gets her out of my hair !

Aside from that we just don’t touch cash as any matter of course. The one exception was a couple of weeks ago when we had the TV antenna changed. The man-in-a-van ‘preferred’ cash (nod nod, wink wink) !

Very handy her ladyship having that sewing stash !!

I carry £50 in my phone with two cards. I don’t even carry a credit card any more as the only time I would ever use it would be online at home. Nor do I bother with a wallet any more for the same reason.

The newest card (the Orange one at the back) is a brand new online only bank account that I took out in response to the growing number of ‘pay through an app’ portals in places (namely my local !). I have an inherent distrust of the security of these systems and given the sums my accounts can hold it would not be an insignificant pilfer if some detail leaked. (More on this another time when I have used it more). 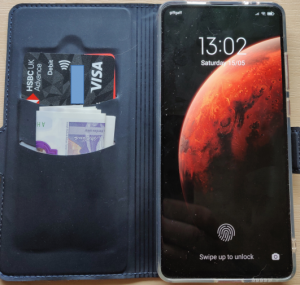 The money in this phone holder has not actually come out in over a year with the exception of changing the tatty old holder for a new one. I only carry it as a backup, but in reality there is no real need. The only other money in the house is about £130 in my travel docs holder (with passport, driving licence, and about 50 Euro’s and 150 Swiss Francs left from past trips).

Later this year (if the Edinburgh Military Tattoo goes ahead) I will use some cash as ‘backstage’ it would be unlikely to be cashless, but essentially, for future life …

The use of cash for us is pretty well over.