A couple of months ago I saw a post about a 30min you-tube video from Ray Dalio (downloaded over 10M times) that very simply and graphically explains how economies work. It is high level but none the less is very clear. 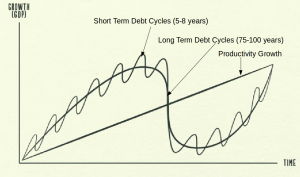 Ray points out that laying the short term debt cycle on top of the long term debt cycle and laying this on the productivity growth line gives a reasonably good template to see what happened in the past, what is happening now and where we may be heading.

All so far good. But I happened to watch a vLog from Ramin Nakisa at PensionCraft where he showed a clear graph demonstrating how UK productivity growth has stagnated since the 2008 crash. 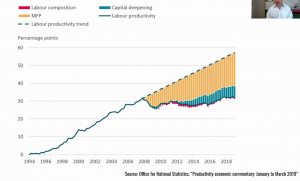 So I do rather wonder, as national debt increases at a pace, National incomes essentially having flat-lined are now starting to increase, and productivity essentially flat (or reduced in real terms), how on earth we can avoid a heavy correction at some point, or even worse, a level of deflation.

Post Brexit in 2020, the UK government has got to prioritise productivity growth to go with the huge stimulus packages announced. I doubt the situation is that different in the USA, and in the EU countries, economic growth is stagnant with massive red-tape and ever more political interference. Even Germany, where wages growth has been held in check for decades, and productivity growth a primary economic focus has stagnated. Very recently there are some rumours abound that the German Government may be about to loosen is fiscal balance stance (essentially start to really borrow money to stimulate) – we have to wait and see there though.

When I started to draft a few notes to write it was in February. I did wonder if are heading to a 1929 type crash and thought that doubtful. But a decent Correction of some sort was certainly coming and I felt it would be a flat market over the year and then fall early 2021. I based this on the USA Presidential elections – markets tend to be relatively neutral in the 6 months leading up, and that the USA and China will have finalised a trade accommodation. Everyone will breath a sigh of relief and wait until after the November election.

Then of course the Covid-19 virus rather changed all that. We have seen a 30-40% correction so far and I suspect there will be more given the main virus hit is only really just happening in Europe and the UK and has not really woke everyone up in the USA. We have 3-4 months at least of real turmoil. Meanwhile, China has come through the turmoil (just about) it and is going back to work.

In the USA politically at least it allows all sides to posture and buffoon about, but essentially will give either an incoming US President, or the Current occupant (Trump) a bull run in the next 4 years. If the Democrats win then hard to see how they would not get 8 years and if Trump wins, hard to see how another Republican does not get the keys on the back of a bull. They can all claim to be economic hero’s as everyone will have forgotten that from the bottom its only ‘up’.

I started drafting this article and thought 5 weeks ago and was wondering a little about when a correction would occur. I wrote an article a little while back where I came to the conclusion that Covid-19 would certainly close the possible window. I guess we all become desensitised and consider bad things (corrections) as so against established interests that everyone will just stop or slow it. We have just had a revision lesson in market herd psychology and sentiment. I should have sold everything in Feb when I wrote the article !!

I thought that post Brexit a decent stimulus package would be needed. Now with Covid-19 there are already announcements of massive packages. China with $140B worth and various sums announces in the UK into many billions. It will not be long before Europe and the USA do the same. Given the relative level of national debt, I do wonder where the money will come from though.

Just put the current ‘plague’ in context …. it is not the end of the world and will be relatively short lived. 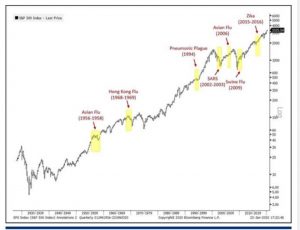 Ray Dalio’s long term cycles will continue with but a small wobble !

Now as I finalise my article, I am reflecting that as this correction has occurred now, before I do a main pension crystallisation event, I am in a quandary. Not at all sure the best course of action as my funds have taken a real battering.

But investing is long term. There are a dozen companies on the main FTSE I sort of track and all solid businesses that have dropped 30-40% from an already just fair market price. The idea in 3 years they will not be back where they were does not follow to me.

So no time to panic. I have a backup plan and can just take small amounts as needed and work the rest if I choose.

So now the question I do not have any answer too … where to invest in the world and how diversified, how defensive, how aggressive, how anything do I need to be to protect my pension ?