I have written before about re-investing in solid income bearing, slightly unfashionable stocks. I had an interest in seeing what happened over time to some renewable companies (long before I was in a position to liquidate holdings and invest).

Some time ago I noticed a peculiarity in some solid dividend paying stocks. Whilst it is known and regular that on going ‘ex-div’ (ie the point at which you can sell the share and still receive the payment) and the next working day the price drops. Nominally it is by the dividend payment. The theory is the price goes up to reflect the whole value of the business (which included cash) and then drops as a result of cash being payed out (or essentially moved to the outgoings tray.

Frequently the share price does not drop by the entire amount, and in the case of some higher and less regular payments actually drops more.

So I started thinking … what if ? .. could I exploit that in any way ?

This whole exercise gathered a life of its own as my mind kept asking ‘what-if’, so I have split up what would have been a monster article of around 7,000 words into four parts:

Split up so you could move to what may interest the most – been quite an exercise ! But if nothing else, take a look at the summary in Part 4.

So I started by looking at running the data of four stocks I have long term tracked and playing with dates to reinvest.

But I did start to think that I should look wider.  So I filtered some holdings on my data package, broadly looking for:

I ended up with around a dozen holdings. I widened a bit and looked at 2 payments a year and added a few more. In the end, I had 18 holdings and aside from the 4 I was actively tracking (for other reasons) the rest are purely random. I have heard of a couple but really know absolutely nothing about them.

…. This is an academic exercise remember !https://www.firemusings.org/dividend-reinvestment-does-it-matter-what-strategy-you-have-part-4/

So what is the Idea/Hypothesis ?

I have three simple variables I would like to consider:

There are 18 holdings I selected. Details in the appendix at the bottom, but really they are not as relevant as the picture I am trying to explore.

As the shares all have different pricing the only way to see the relative picture is to rebase. So a graph of the rebased prices relative to the first day is: 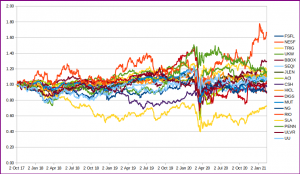 What does this show us ?

Overall, this is not (or should not) be a surprise in a portfolio: a small number of loser’s and some solid one and one or two really good ones.

Graphing out growth in terms of the min, max and end point, the holdings behave pretty much as many stocks do: they dance about but with a positive slant.

Again, not a surprise, they are modestly preforming higher yield stocks – growth over a period dances between limits but a generally upward overall momentum. 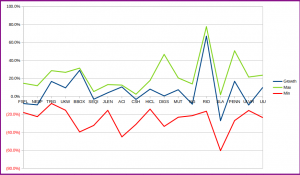 Dividends can be seen to be pretty regular and the cumulative amounts are as follows: 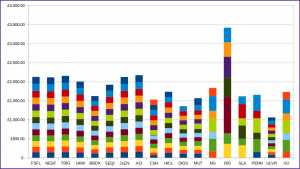 Obviously the big mining company Rio Tinto (RIO) has rather higher yields in this period.

So how can I analyse this and what parameters make sense ?

Well there are I feel 3 parameters here:

In addition I can include or not include costs (although makes more sense to include them so there is no distortion). I could look to:

So Direct, this is what the investment looks like. Each line is a separate quarter and the amount is that re-invested

And finally if I limit re-investment to a minimum (in this case) of at least £300. The way I did this is sum all the dividends, filter those meeting the criteria and then apportion the sum based on how much movement, ie a bigger rise (in this example) gets a bigger re-investment 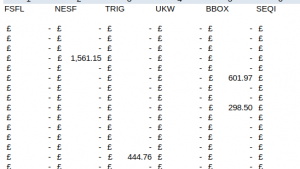 By running this for each variable and tabulating I get a big boring table: 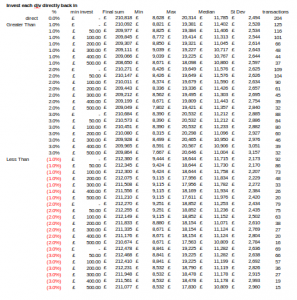 And finally from this I can run a few basic statistics Min, Max, Median, Standard Deviation and Number of Transactions.

Now there are two really interesting things come out of the data: 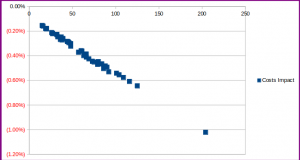 A final note on timing. As I stated earlier, the timing of the re-investment made fractions of a percentage difference. Overall, the number of shares total at the end was no more than a handful – just noise, so to make things both simple and more likely how I would operate, I notionally collected the dividends and then did all re-investment on the last trading day of the quarter.

In a practical sense, would anyone really just do all this on a daily/weekly basis ? I doubt it,and unless some form of cheap auto-invest was used why would you. Just shown above that selection based on the stocks that dip gives a better outcome so again, why would you do an automatic ‘fire & forget’ strategy ?

Now a sit down and review every 3 months is perfectly both believable and practical.

So I have been surprised but I am left with a few questions still ….