In part 1, I started to look at whether it mattered when I re-invested a dividend received in a stock and found it makes little difference (certainly if the same quarter) for the holdings I looked at. It also did not make a great deal of difference if I only re-invested above certain thresholds (to reduce transaction costs), but did matter if I only re-invested into shares that had dropped in the previous quarter. This generated a noticeable 5% (approx) overall benefit over the 3.4 years.

So to make this both a bit more representative and also add some depth, I have picked 18 stocks from the FTSE350 and will review over the past 10 years.

So as before, doing a re-base of the share prices means we can look at their relative performance. As before, graph out. There are a couple of strong performers, some not so good and mostly also ran dancing around the initial price. The big thick black line just really shows what would happen if I invested an identical lump into each and then left that (no re-investment). The big correction in 2020 is clear and also clear the prices have not fully recovered. So a loosely representative performance of a wider tracker perhaps (not that dissimilar).

The big thick black line represents the relative performance of just buying an equal holding in each and doing nothing (but collect the dividend and spend it).

The purists might argue that dividends should be included here on relative performance but I disagree – they are sunk in that I collected and spent them. For me relative portfolio performance is about growth overall and that would require re-investment. Also, you get into complicated DCF (Discounted Cash Flow) calcs – boring and totally unnecessary.

Looking at the transaction costs there seems a difference to my first look in Part 1. However, that had a lot less transactions and over a much shorter time frame. Taking transactions of less than 200 visually the line is fairly linear so seems consistent, but clearly (as intuitively expected), as transactions rise significantly the costs relatively rise. (so not going mad after all !) 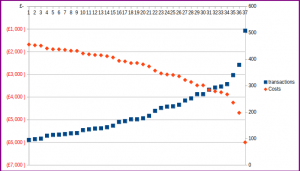 In exactly the same way as was clear in my first more limited review, ‘Buying the Dips’ is by far the best long term strategy.

However….  the differences between buying any holding that meets the dip criteria or only when the dividend is above a certain value is rather less clear. There is a difference but it is not as wide cumulatively over time and the difference is around £2k on a capital sum of circa £365k – pretty much noise really (although do remember that transaction costs will accumulate). 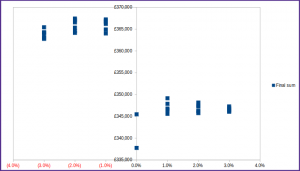 Over a 3.4 year period it is I feel difficult to gauge the cumulative impact of re-investment. But over 10 years a more meaningful set of numbers are possible. One of the slight complications in this instance is in the past year dividends have fallen due to the economic shock and are not quite recovering yet, but non the less, that just means a better future picture is probable.

So, in this example, to start with lets look at just re-investing each dividend: 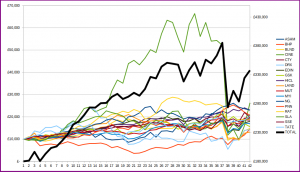 I am just going to look at ‘dips of 2% and re-invest sums of at least £300’. I cannot realistically see me going to all the trouble of dozens of small re-investments a quarter for a relatively small number of holdings if I was doing this for real. 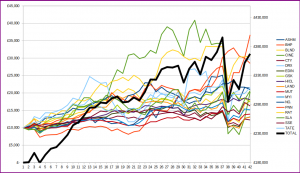 It seems obvious what happens when stocks that grow very high suddenly fall off a cliff like CineWorld. In practice, it is a timely reminder that keeping a group or portfolio in balance is not a bad thing and reducing its holding might have delivered a slightly better overall outcome. This is the graph of buying into dips, it is worse on buying the rise as ever more gets re-invested into rapidly pumping high stocks.

But even with that large drop in one holding overall the group delivers an annualised growth of 7.4%pa for a decade … can hardly complain at that ! (and yes overall some index trackers or funds might do better, but the point here is ‘can I manage a fairly unresearched portfolio and have a good chance of being OK… if I want !)

Just changing the threshold to re-invest between £0-£500 I find (by chance) that £300) delivers the highest overall value.

Some time ago  I wrote about dividends and said that re-investment was not just about growth and capital but actually creating much higher future income streams.

The obvious benefit of dividend re-investment is to build on income streams whiles protecting capital. Yes, it will never be the very best return you could get. You only get that by going high risk high growth. But for a low to modest risk portfolio approach this is pretty sound.

And remember that this includes the last year of a large correction and reduced dividends and still delivers solid income and a total annualised return that is very healthy.

What if I include a measure of annual re-balance. Just using a simple (and fairly crude) method:

It is a bit crude but simple to implement and the results generate an uplift both overall and more particular a closer grouping in total values. This is importance as you never want one holding of a portfolio to become too large as a percentage of it – just adds to the risk 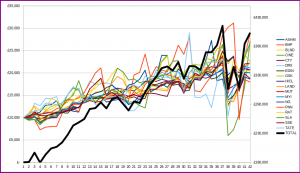 I kind of now think I am on to something. That this is not just an academic exercise. There is clear benefit (so far) to taking a slightly active view to managing what is essentially a passive portfolio.

So now I have two possible ‘rules’:

Enough of this and onto the next bit .. and boy did it turn out to be a rather more complicated: full random stock pick … see Part 3 and then Part 4 where I summarise it all.