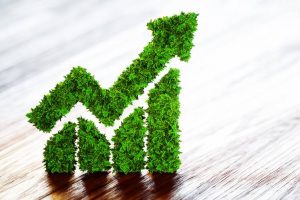 A short article this one ….just been looking at some ethical fund investments and then an article in the MailOnline popped up where a proposal of 10 holdings is made. Perhaps cherry picked, who knows as no real selection criteria were posted. But it does serve as an example.

There are more and more funds and ETF’s that are based around so called ‘ethical principles’. But these come at a price with typical OCF’s of 0.8-1.2% pa. This is on top of extra dealing charges and platform charges. It would not be hard to end up paying 1.5 – 2.0% annually in total costs. That is a lot when fund yields less than 2% are typical. 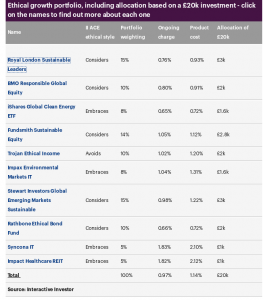 (taken from article in the MailOnline)

Now I make no comment on this proposed portfolio having not in detail researched the holdings, but I do reflect that an awful lot of businesses now are forging ahead with their own ethical policies, with a timed scale back of investments into, say oil and coal, and more focus that suppliers have adequate or suitable waste, energy and personnel policies. The ‘Greta’ effect is taking hold outside all the bluster and headline grabbing as businesses realise they are sure to be targeted, picked on, or held as examples of ‘unethical’ behaviour. In one sense, very laudable, but equally does act as a growth drag at least until the majority of the market catches up.

I rather foresee a time in the next 3-5 years when the overwhelming majority of listed companies with have considerably higher ‘ethical’ standards than today. Will be more interesting in the world of Bonds, as these are essentially loans for working capital. Why would you loan to an ‘unethical’ company without a substantial risk premium ?

So ultimately, why pay an inflated OCF and higher dealing charges ?

Well … for one thing these funds and holdings have done very nicely with an average % annual return of 9.8%. Only 7 of the funds were going 5 years ago and the average for them is an even more impressive 11.6% annualised.

But so have many funds been just as good. It is easy to be seduced when everything is on the hoof in a bull market. The wider point is that relatively they have not done badly at all despite the higher costs. In part this may well be down to a more active brigade of investors seeing ‘ethical’ stances. But as the market catches up, this higher cost drag will surely have an effect.

Some of these funds look interesting and I may well look at putting some money in, but the majority of my investments at the moment (in a somewhat risky and unbalanced portfolio) are centred on technology growth in the renewable and future energy market.

My main point is don’t get seduced by ‘ethical’ as a key decider, and look for both value and solid ethical principles. They will ultimately drive both higher returns and greater market acceptance.

Just as a note, in the Mail article it details Investment type. A new one on me, but worth noting as likely to be how future holdings label themselves

Note:
None of the above constitutes investment or tax advice. I have simply written about my analysis of our personal situation and offered a conclusion. Always do your own research and analysis.