So Where are we Now ?

Although I had not gotten around to writing about it, I did have a multi-stream plan that was almost complete. A mix of long term growth, Future technology, slow & steady with good developing yields, broad ETF’s and bonds. In previous article I looked at our needs in the next few years and was planning accordingly. The longer term growth/re-investment side and the shorter term income, low volatility side.

But a nasty little virus probably from eating an undercooked Bat seems to have scuppered it for now ! The best laid plans of mice & men eh !!

Now I need to plan a different route….

We  know and can say with some degree of certainty a number of things already following the outbreak of Covid-19 and the ensuing market reaction.

Big business is already announcing either withheld, deferred , reduced or cancellation of dividends this year. No where is this more evident than in Banking. Practically all the UK big banks have announced dividend suspension – they are preserving cash. With many big industrials suffering large losses, it is inevitable that they will follow

It is not in any way over, but really just over the first phase. As Q1 (and later Q2) earnings come in then expect further valuation falls, further dividend cuts, and the inevitable drop in Market Caps. No one can predict how much, but I expect large corrections down another 25-30% from where we are making a total drop over 40% in most cases. Yes this will vary in range, but you do not need to be a market guru to see this will happen as many valuations are based on forward discounted cash flow and earnings predictions. These will be hammered across the board and probably only partially recover next year. Again, no great insight needed, just look at the predictions for GDP falls across the industrialised world.

How Far can the Markets Drop ?

Why do I think 40%+ and not 50%+. Well, there is no science, but a sense and feeling. If we look at the major indices Total Returns (TR) for the past 3-5 years and look what has happened in the last year to 18 months, then this last period has basically been flat and in a wide trading range. The USA is a bit different but is always more bullish or more bearish.

Over 3 – 5 years, the UK markets have been OK with annualised Total Returns over 9%. Even taking into account the drop since January the annualised TR has beaten average inflation. My feeling last year was that heat was being taken out of the UK market slowly and there was not great 2008 bubble.

As for what happens in the next 6-9 months, well, the Q1 and then Q2 earnings figures will come in and as businesses have largely reduced or ceased trading in a meaningful sense, the earning have got to be down or nil. More companies will conserve cash by cutting or deferring dividends and this will naturally drop the valuations. My gut feel is another 25% from where we are. Much more puts us in the 1920’s and that was an enormous bubble. This is a single point hard shock.

Whispers from the City…

Interestingly I hear from some city types that there is a view this is still a 9/11-type event, rather than a Systemic 2008-type bubble. The former gives a very sharp shock but recovery is relatively quick, the latter a much longer process. The risk is the former becomes the latter as businesses get destroyed or become non-viable. This is why governments are printing money like crazy and working out how to sell the balance point of loosening restrictions traded for some further Covid mortality. The wider social damage could cost more lives than is saved by restricting longer…..

I have little time for many politicians who on the whole have never run more than a bath tub let alone an actual business, but cold hard choices are needed and non is more colder and harder than balancing wider good over life: it really is the devil you do and the devil you don’t. It may be the way of things, but perhaps we should cut our political leaders a bit more slack here.

If you did not sell to cash in February, then too late most cases .. just ride it out. If you do have some cash, and I will be fortunate to inherit some in a few months, then there will be plenty of relatively safe companies that are just plain cheap. Relatively low risk buys with a hold for 3+ years will in many cases will give a return of 40-50% as the SP recovers and dividends start to be paid. Frankly, just Index tracker accumulators will for the most part deliver compound annualised growth rates of 15-20% over the next 3 years.

Don’t believe me, then simply look at past post-bottom recoveries. There is an acceleration back to previous levels then a slow down as the levels meet the inflation adjusted level then a bit of overshoot followed by the market ‘taking a breath’.  I expect the Vanguard type funds to do very well as they are very low cost.

Traders will love it !

Well I had started to track and target a number of funds and individual holdings with a view to making long term investments this year and then re-investing the dividends for 5-10 years – my longer term retirement income plan. Well right now that is a blown plan… or rather, a deferred one. There are plenty of funds and companies that are very solid and will return to dividends next year and beyond….. and they are cheap now, and getting cheaper.

So personally I say forget income for the next 12-24 months at least and concentrate on growth and recovery holdings. As these grow the ‘4%’ brigade can sell into profit to gain that income if they need to. Only as earnings recover and the future cash positions look sound will dividends recover. Personally, I expect dividends to be suppressed or lowered for 12-18 months and will only likely start to return 6-9 months after stocks have positively started to recover ….. exactly as has happened after the previous big drops. 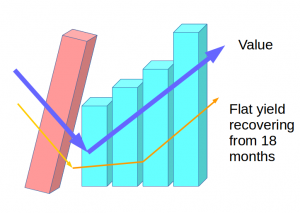 How about those Cash-Bucket Holders

There are plenty who have a strategy of holding cash-buckets to ‘ride out correction’, but frankly unless you have at least 3 years funds this is not a strategy that can deliver anything other than a long term drag. Think about it – you have a chunk of money not ‘earning’, so it can only act as a drag on total returns. My own thoughts  were to hold circa £5-£7K in cash to cover for immediate 2-3 month needs, and although I have a little more at present that is because I liquidated a small holding in early March – I have no need to do anything at all until July/August so have lots of time to work out what is best. I am not adverse to selling a holding at a loss to invest in something about to fly (and there are a couple of things I can see doing that), but events have not changed my view of a large cash-bucket one bit.

Lots of views, but generalising past recoveries they are characterised by (in broad brush terms) 3 factors:

A lot of bubbling about until enough green shoots appear that confidence starts to come back. So in price terms a fair volatility, and in yield terms, reducing, depressed or cancelled dividends. The time for this varies, but unless we really do slip into a 1920’s type market then I would look the the end of this year. Nothing much will look attractive enough to re-price up until earnings start to recover after all.

As the inflation adjusted line of the point of correction is met and passed then growth rate flattens, income starts to recover well and confidence returns. It is very broad brush, but pas patterns suggest tjis and as the market is very herd and physiology driven, then as these points are met, people ‘breath’ in a different way, risk factors change, Tolerances to falls change, so the pattern will change.

Then everyone forgets momentum will run out as the long term trend line is passed and prices fall back as ‘smart money’ takes profits and gobbles up cheaper stocks from the panicked masses selling. Income growth flattens back to long term norms. 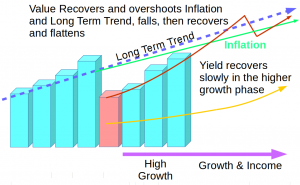 The Bull – Bear – Bull – Bear cycle will return in time. But for those tied in right now, those who did not sell, those with no spare cash, then I fear a rough ride will be had, but if the massive infrastructure spending and bail-outs works then by this time next year we could well have gotten a full recovery past the initial green shoots.

Note:
None of the above constitutes investment  advice. I have simply written about my analysis of my personal view. Always do your own research and analysis.