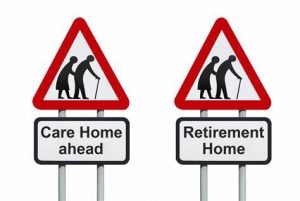 Last year I did have a brief think about long term care costs. We were getting to the point of a comfortable FIRE and did have a wonder about what happens when we get old and doddery. We met later in life and have no children and most family is of the cousin/distant types, so there really no one that is going to look after us as we dodder about.
In the UK, pretty well if you have any money above a wallet full, you pay for yourself until it is gone. That means we will have to pay for care and support.
But how much ?
About a year ago I started thinking around £1M as an initial target fund for a decent retirement, and we are getting there, but in just looking at care cost it became apparent that we would need at least £50K each for each year (and probably more). Some generalised articles I found suggest long term life expectancy with such support suggests 3-5 years is a realistic assumption, and less with significant medical care. So without any real analysis, or reasoning, I stuck my finger in the air and pulled £500K as an initial assumption.
So now, my target is £1.5M ! This is as far as I got and just stopped thinking about it.
In the Autumn of last year my mother started having some speech problems, a few issues swallowing, and unknown to my brother or I, started having the odd blackout and falling. This culminated in a bad fall 3 weeks ago that saw her hyperthermic and unable to move for 5 hours before being found. The subsequent hospital investigations demonstrated two things. Firstly, there was nothing mechanically wrong in her neck to explain the speech issue, but much more devastatingly, she had a form of Motor Neuron disease. She was not getting any better and the prognosis is grim and in the months not years band.
In the 12 days since we got this diagnosis, it was made clear she could never go home and needed increasing care, so my brother and I have been looking at nursing homes nearby and reviewing them, the care quality commission reports and reviews. Finally we decided on one and so today, she will leave hospital for this nursing home.
The cost is a rather more than my finger in the air though at just a shade under £60K pa with some additional charges as her condition deteriorates…. mum asked to know the numbers (she has all her mental faculties) and her eyes nearly popped.
The prognosis from diagnosis of MN is generally no more than a year and in her case (age and general frailty), the specialists are saying 6-9 months as a guideline. Given her investments and assets, the cost is of no importance. She would have to live a fair few years to run out of money to pay for this and that is not going to happen.
Nothing to be sad about. A full life and 80 in a few weeks. Just a miserable end for a lady whose favourite hobby is chatting. She used to never shut up !! – be careful what you wish for when faced with a mum who talks constantly 🙁
But what about the wider implications for my wife and I ?
We could realistically still see a need for 5 years of a level of care. There are no hard and fast guidelines, but people go into a nursing home because they struggle on their own and need some help. That does not improved and there is clearly an innevitibility of time. So to me, a finger in the air of a 5 year horizon seems both sensible and optimistic.
Care costs are going up relative to inflation and I don’t see that link changing much any time soon. In fact, the more I look at it, the more there is to consider investment in a care company as a n-exciting, but steady income investment … the irony is not lost here really.
Coming back to numbers, in todays money a relative cost of £70-£75K is perfectly possible by the time we need it…. or £150K for the brace of us.. for 5 years, thats £750K (in today’s money).
Suddenly, we are starting to look like we need enough to FIRE and then the same again to hedge for care. Practcally nothing anywhere I have seen is written on this, and it was really only facing my mum’s dilema that made me really think about it in more than a throw-away sense last year.
There are no absolutes in this world, and few guarantees of health. We could end up with dementia in which case a great deal becomes the state’s responsibility not to mention not being aware of anything anyway. So in planning your long term budget, maybe spare a thought to the ‘what if’ at the end of your life, and look at what provision you might need over and above your retirement needs.
In the end, it is more to pass on, bequeath, or give to charity if not needed.
As for my mum. She will be safe, comfortable and not in pain for the few months left. The best of a bad situation, but a long, happy, and good life led. The circle of life !