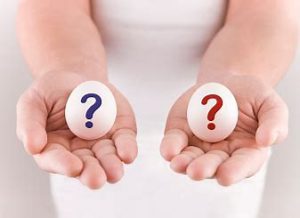 It slightly irks me that now we have FIRE’d we don’t have the income any more to further add to our ISA’s, but rather take from our investments what we need.
But as my Self Invest Personal Pension (SIPP) is doing well, I thought I would consider the possibility of over taking out monies, taking the tax hit and seeing what the implications down the road would be.
The two second thinkers might immediately point to the tax hit reducing what would be invested in an ISA. If both have similar return setups then logically a lower return would be had … surely !
Well, worth having a look I thought having figure that investing in a SIPP over an ISA with free money rather depended on personal tax position.
Also worth pointing out that ‘surely’ is an emotional response and it is cold hard numbers in the end that pay the bills and give us wealth.
Why does this matter, why bother. There are good tax and Inheritance Tax reasons to maintain a large SIPP and not transfer to ISA, but in our case, we have no children and no really close relatives so our priorities are rather about us, long term care provision if we need it and then looking at chartable bequests. The tax position when we both go is not really that importance to us.
As I looked at in an earlier article my drawdown plan is rather a couple of large steps downward. 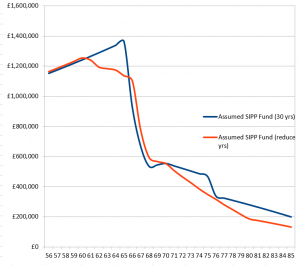 My SIPP plan is front loaded with a large requirement now, reducing by around 25% when we pay off the mortgage in around 6 years time and then another 30-35% when our state pensions kick in a little after 5 years later. So the equivalent income need in 12 years is around half the requirement I have to withdraw now.
I can’t believe this is an unusual situation, but rarely do FIRE articles discuss this stepping, its all about 4% for 30+ years !
So with a much reduced future SIPP need, the importance of ISA tax free income possibility to us becomes a significant part of long term planning partly as we cannot see how long term tax rates can stay where they are. Personally I see increases in tax rates coming over the next 10 years. There is just too much social care needed, too much infrastructure change to meet the carbon agenda needed and frankly an ever burgeoning health system. Part of our thinking is to look at reducing our long term tax liability.
Hence the question…. does it really make sense to take a short term tax hit for a long term income gain ? Is there a long term income gain ?
Assumptions
—————-
One of the key assumptions in reviewing relative performance needs to be about dividend re-investment. We know that compounding is a key element to long term performance, but for me it seems unreasonable to assume the strategy will be the same in an ISA as in a SIPP.
Why ?
Well, for one thing we have a need to continually remove monies from our SIPP’s to live and pay the bills. It seems utterly illogical to re-invest only to have to sell for withdrawal. Why pay the transaction costs twice and do all that work. There are proponents of retirement income being passive only (or predominantly), but just doing the numbers this is only really practical in very large portfolios. (A £40k need running on a fund total giving 2.5% after costs would need to be at least £1.6M and larger to cover for year on year losses or gains running only passively).
But if we are happily removing money from our SIPP, why would we take tax free cash out of our ISA. Personally, I see the ISA’s as being a long term reserve fund and a means to take us out of the tax brackets in later life or ensure we don’t fall into higher tax brackets. But could equally be a balance in which case it becomes a bit more complicated to compute simply.
So my assumptions are:
1. Dividend yield in a SIPP is not re-invested, but taken out as part of taxable income
2. Dividend yield in an ISA is fully re-invested
3. Investment and yield performance is identical (i.e. running the same strategies)
4. Inflation will be ignored, i.e. returns will be returns above inflation. Similarly tax thresholds will only increase at inflation so can be ignored for this exercise .. keep it simple and lets see
5. Capital Net value (see below)
So lets visualise this with a couple of  images:
1. SIPP growth, tax liability and NET value and income 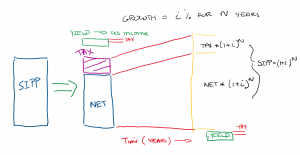 2. ISA growth is exponential due to compounding of the yield 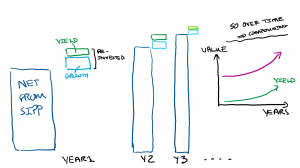 ISA
So if you expect to take out at the same tax rate as putting in then whether a High or Low rate taxpayer there is a material benefit of around +8.3% to taking money out and putting in an ISA. In a better context this is equivalent to a 0.8% annualised return uplift…. not exactly earth shattering really !!!
But taking money out of the SIPP, taking the hit in tax and gaining a marginal TR benefit is not really the picture. It is about future income and cash flow and de risking future tax liability.
The value of the dividend in the SIPP (net) is £552 (or in he case of High in Low out at the end) £736. The value of the ISA yield which is tax free is £740.
So for someone always staying on the same tax rate, the income from an ISA is +34% higher … WOW !
Now it is perfectly possible for someone  to change from a High Rate to a Low Rate taxpayer at any time. For example, suppose I wanted to take the money out in my last year of working at the Higher rate, but then am always paying tax below the High Rate threshold.
My TR would be £36.82 => NET at 20% => £29.45K + Dividends of £8,718 at 20% => £6.97K giving a TR of £36.42K and a Net Div forward of £921 at 20% => £737
As I rather expected, it is not at all a clear decision. So in Summary, at a simplistic level I can sumarise as:
[ High Tax Payer (HTx), Low Tax Payer (LTx)]
It seems to me that if you expect to remain in the same tax bracket, in all cases taking the tax hit and moving money to an ISA gives a material TR benefit and a substantial Net income benefit.
The surprising case for me is where a High Rate taxpayer then becomes a Low Rate taxpayer. There is an almost identical benefit to moving to an ISA. In which case the decision should perhaps be based a bit more on long term inheritance tax planning.
There is one more possible fly in the mix and that is tax rates in general. In the UK, there is a growing public sector, massive health and social spending increases and huge capital spending programmes. I personally find it less than credible that tax rates in some form will not adjust upwards for example where the the base level moves from 20% up or the break point to High rate is lowered, or the Tax allowance is held and diminishes in real terms. I see an inevitability to higher taxation.
So if able, perhaps a longer term view of moving money to an ISA is not at all a bad thing. Also, there are a lot less restrictions on what you can do with it. For example moving money abroad is easy, but with a SIPP there are large tax liabilities.
In my first article, I looked at just where to put free cash (SIPP or ISA) and came to conclusion that pretty much in all cases (for me at least), putting money into an ISA was the best material outcome. The tax relief on putting money into a SIPP was effectively a ‘seduction’.
In this article I considered the case where money is already in the SIPP and we might wish to take a lump out and move to an ISA. The cases are complicated by how you treat the dividend and what tax assumption you make, but for me and my case (i.e. now a Low Rate taxpayer and will remain so), there is a very strong case to move money to an ISA for a substantially higher income benefit in the years to come.
It could be said that the Growth assumption is bogus in that a fixed 1% above inflation is daft. Not so. If you use the same assumptions in SIPP and ISA you get the same scale applied. Also, one option is to put large sums into a bond ladder or low risk fixed interest system. I had a little sketch out of a possible scheme based on my known income need profile.…. now that will likely be another article sometime soon.
Note:
None of the above constitutes investment or tax advice. I have simply written about my analysis of our personal situation and offered a conclusion. Always do your own research and analysis.