A couple of weeks ago I wrote about a cost-benefit analyst’s looking at which was the better (i.e., least worst option) in selling a small holding out of Trading, ISA or SIPP.

The particular share (Bushveld #BMN) was circa 9.3. But Putin has changed all that.

Whilst I had every reason to expect a strong re-rate over this year to well north of 30, Putin’s invasion has caused a massive and immediate block of Russian goods. Now almost 20% of world Vanadium supply comes via (Evraz among others) Russia.

Suddenly, the Vanadium price has rocketed from around $42/kg to $60 and climbing. This has reflected almost immediately and the share price is now knocking the door of 15p and will just keep going.

For anyone who does not know, Vanadium has a primary use of hardening steel (you cannot really make tough super hard steel for construction without it), and also a growing use in long term Battery Electrical Storage Systems.

Now the main ‘benefit’ I analysed came from the very useful tax loss I would have had, but will no longer have. Not unhappy about that at all. Suffice to say, they are all a lot closer, with taking out of my ISA being marginally the least worst option.

But I have decided to split the amount and take out of my SIPP and Trading accounts. SIPP, because I have overpaid tax on withdrawals this year, so simply to save the faff of re-claiming it, will take an amount that effectively soaks up the overpayment. Trading, as I really don’t want to touch my long term tax free account yet and the amount is relatively small so the impact is miniscule.

One of the (so far) lesser realised impacts of Putin’s invasion is the impact of food supply to the world. I rather think this was one of his strategic goals anyway – control of more western world resource supply lines.

Russia and Ukraine account for around 25% of the worlds Wheat production with approximately half of that each. This is huge. The impact of pricing will become enormous and unless the conflict is over in the next 3/4 weeks then this years harvest in Ukraine will be small. Even assuming Russia was allowed to export (very doubtful), world supply could drop by 10-15%. There are around 1.5B people round the world in food poverty. A constrained western supply means a choice of feeding one’s own or giving it away. I know what is likely to happen. (Anyone tempted to have any sympathy for Putin’s position and therefore his actions – just watch the next year and impact of starvation and world health).

On top of that, the constraint in oil supply has spiked the price to a point that it is now probable that a growing army of people will not be able to afford to drive to work. Working from home is one solution, but really not a long term one.

But we are lucky, we can afford it ! The impact on a vast swath of society, along with travel to work costs will be a seismic economic shock. Spending at a consumer level will drop, and maybe substantially. Personally, I think we are at the peak of the current house prices and they will start to fall (as always happens in a spending restraint and recession era).

With real inflation running at over 5%, pay freezing or dropping, then suddenly falling into a sharp recession is very likely.

Coming soon to wherever you are (in the west particularly), the era of fairly cheap food is over, the era of cheap energy is over and the era of a level of austerity is very likely coming.

I read an interesting article by an ex fund manager on some of the macro-economics. A dark picture where simply printing money (QE) no longer works and good old fashioned methods will be needed, ie, interest rate rises, spending cuts and supply constraints. All of this is not on any one governments making, but rather on a succession of intellectually sound bite and gimmick addicted snake oil salesmen politicians selling an endless supply of cheap money with a pittance interest rate and ever lower pricing of goods based on ever more reliance on far off despotic regimes.

This era is coming to an end. I expect higher energy costs, higher food costs and higher raw material are here to stay for the forceable future.

Not as daft a question as it sounds. As the saying goes, ‘never waste a crisis’. I cannot second guess what idiot policies a range of governments will come to, what agreements with despots and autocratic regimes will be made (and we should not kid ourselves on our version of democracy being brilliant), but ever more centralisation and self-reliance is sure to come.

As for ‘we who FIRE’, it rather depends what you are invested in. A few things I feel to bear in mind:

1. We have started a commodity super-cycle – this will only deepen

2. Infrastructure spending will rise significantly – in every sharp recession/inflation period, governments get out of it by spending on infrastructure for the future. This uses more commodity materials

I could go on, but in the end, if you were to move investments to a significant area, then commodities look to be high growth for several years yet.

Oh, and any fund that has significant Russia exposure will rapidly become ‘non-grata’. Russia will be in the wilderness for years now. Not even getting rid of Putin will change that. A fundamental shift in how Russia is governed and the rule of law fairly applied (so the kleptomaniac oligarchs cannot take all the wealth) is needed.

Even the fact that up to now a quarter of the worlds wheat has come come the Russian Steps will not change that. Either alternates will be found, or a reduction in consumption made.

I am not sure we have all woken up to the seismic geopolitical & geo-economic change that is on us. Brave new world, but also great opportunity.

I am so in awe of the plucky courage of the Ukrainians, the seemingly endless ‘ordinary’ folk signing up to take arms and defend their county from tyranny and aggression.

I am a big rugby fan (just back from the 6-nations England game in Rome – fantastic weekend). The rugby world is wide and full of characters, courage, friendship and kinship. I salute Giorgi Dzhangirian, the former president of the Ukrainian Rugby Union. Taking up arms on the militia line to defend his country at 83 years old. 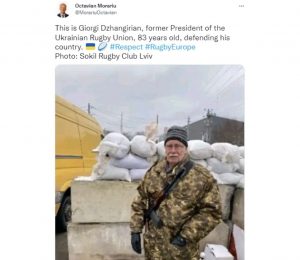