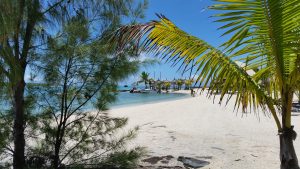 As we head into the season of excess (oh yes… and goodwill) I do sometimes think about how much extra we can all spend on what amounts to a glorified Sunday roast and a few plastic presents no-one actually wants.

Now don’t get me wrong. There are lots of people whole love it all, but personally even as a kid I did not like Christmas. Maybe it was being forced to wear a daft pirate hat or listen to my dad’s annual speech to the family (he was a teacher and could not help himself). Maybe it was when I discovered Santa was dad (just thinking about it … what a hoot… I shall tell the tale later as it is funny)… I don’t know, the western world is moving to a more environmentally friendly conscience, a check on waste, a view on the energy it too to make stuff, a view on meat and farming, etc etc etc. So maybe going bonkers for one festival and spending months paying for it just seemed nuts. Maybe it is that I have just never liked Christmas n’t like Christmas.

My wife’s parents are very old and her dad is very frail now. Gone is the time they would come over, we would go for a pint while dinner cooked. Now, we will have to pre-cook and take it all over as they cannot really travel and its too traumatic to fetch and take back. That just adds to the lack of fun of the day. He will struggle to eat much and then fall asleep followed in short order by mum !

Last year I made gravlax to start with using a whole salmon (it lasts the whole period and is lovely with scrambled eggs). A big turkey, a boiled ham, pigs in blankets etc etc etc. The cost of just the meats was about £150. In the grand scheme not a lot, but I am not really that keen on turkey and having it endlessly for days is not my idea of fun.

Then all the drinks. Some nice wines, prosecco (not keen on champagne), some cognac as dad likes (or rather liked) a brandy after dinner. The chocolates, nibbles ec etc…. Just for us four it used be the better part of £400 by the time we were finished. Personally I would rather have been on a beach, but my wife insisted on a ‘traditional’ Christmas at least while her parents were alive. The one time she said yes was 5 years ago when we sat on a beach in Mauritius eating Lobster in shorts and skypeing the family before they went to sleep … much better. Did not even miss the Queen’s speech watching it live over the internet.

Our daily view and Christmas Lunch 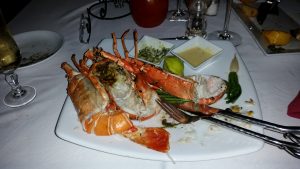 Keen readers might note the missing element of children, and I guess that would make a large difference in my views if we had any, but the cats are bad enough attacking sparkly things and chewing Christmas light wires.

It is not hard to see how even what many call a ‘modest’ Christmas can scale toward a grand and beyond. The news is already reporting on people spending many thousands, big trips to Lapland so their little sprogs can sit on Santa’s knee and pat a reindeer.

Christmas is big business…. and even bigger now we have ‘Black Friday’ where we are enticed to spend spend spend because it is an apparent once in a lifetime bargain give away price … yada yada yada.

…. Jeez I really do sound a right humbug ! Maybe I should check the family tree to see if Scrooge was an ancestor.

Within the FIRE aficionados there are the extreme types who save on every penny and spend their lives blogging (for an income) on how little they spend. I am not one of those and did not retire early to scrimp about, but hopefully to rather enjoy life. It is the ‘FI’ bit of FIRE and maybe the acronym should elongate to FIEYtRE … ‘Financial Independence Enables You to Retire Early’

I wrote not long ago about the cost of my afternoon coffee and cookies. I really was amazed at how much I spent. My wife’s niece got married earlier this years and I reflected on the costs and how much given her age it might have been worth to forego a huge bling-event and invest a good chunk of what it cost.

As for our Christmas, I could look at what we buy food wise and adjust it to what we really need. After all, I hate a huge turkey and endless cold plates finishing with the obligatory ‘curried turkey’ at the end. So this year a decent Turkey Crown, A Ham and I will make Gravlax again as it is lovely over the holidays with scrambled egg on toast for breakfast. We are now more worried about sugar and know we have too much, so less chocolates and salty nibbles also.

We should spend less than the £400 or so last year, but in the grand scheme, its not about the savings for us. Note I have not said presents. To be honest, we just hardly bother unless we see that special thing. Through the year if we garner what we want or need then fine. No need to find some useless trinket that is not needed just because. In fact, next year we are going to have a big clear-out: both dreading it and looking forward to it (I feel an article brewing).

Those people that spend £1K or more (and there are lots) are the ones who could consider more, spend less and do something practical like put the money saved into their, or their kids savings account. It is not about the spending per say, but about the choice: fake blingy day year after year, or something to build for the future. For example, if just £400 of that £1K was saved each year (rising at 2% pa and growth of 4% pa), then after 10, 20 and 30 years you have a pot of £5K, £14K and £29K respectively. Go 40 years and its knocking £53K …. all for making a small saving on excess. 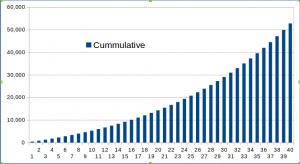 Add in things like my coffee & cookie, a handful of takeaways a year, the odd unnecessary plastic nothing through the year etc and suddenly its not hard to see how a fund of £100K, £200K or £300K+ cannot be generated over 25-30 years.

I have a dislike of Christmas, so its an easy save for me. I have a love for my coffee & cookies which is a hard one. But by reducing what we really like, reducing more what we don’t like, then what FIRE really says is we can get to the point of taking full control of our lives a lot earlier. It is not about being Scrooge-like, but by questioning the value and not the desire. If the answer is ‘It is Christmas so I don’t care then fine’ .. but ask the question.

Anyway, having waxed like a modern day scrooge, dissed Christmas and poured scorn on party excess I will leave you with the funny stories of my youth. It really makes me smile this time of year to recall it all.

—
It is really about how I discovered Santa was not real, and the revenge my dad served up….

I had a modest upbringing in the north of England. Cold snowy winters and warm summers watching the test matches. Very happy times. My parents were hard working but not in the least bit wealthy. My grandad walked half the country in the 20’s looking for work and clearly instilled that ethos in my dad who passed on the wisdom of the ages. A hard upbringing where you ate what was put in front of you and got a chocolate orange once a year if you were lucky kind of thing.

Anyway, I am a twin and shared a room with my brother when young. Dad used to put two plates of mince pies, two sherries and two glasses of Malt Whiskey in our room for Santa and his helpers. In the morning, a pile of presents were there along with plates of crumbs and empty glasses. 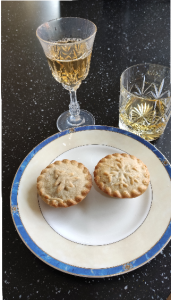 Now I am a very light sleeper and have been pretty insomniac all of my life so under the covers when we were about 7, I saw mum & dad come in, scoff the mince pies and drink the sherry & whisky, and leave two piles of presents, then fix one of dads mountain socks full of wrapped up nick-naks to the end of our beds and quietly leave. So in the morning I eagerly told my brother who rather wetly was not convinced…. ‘santa is real he cried …. pussy !’ [I know .. it is brotherly love really].

The following year, same thing happened but this time I said to Bro we should eat the mince pies and have the drinks as Santa was just Dad … I know .. 8 years old and we had no idea what alcohol was ! Bro cried and was worried ‘santa’ would not come so me being me, I ate and drank the lot.

When I think back to the volume, it would make my head woozy now, but I guess I was so full of adrenaline and excitement to get one over on Dad. Needless to say when he came in and saw us ‘sleeping’ (well Bro was) he let out a loud expletive (questioning our parentage if you get my drift)….. presents still left, but boy did he exact revenge when he thought we had forgotten all about it the next year where they left a couple of presents each and clues to where the next ones were. We ended up digging up all of his veg patch finding the ‘buried treasure’. Thought it was fantastic. We had a whale of a time. What we did not know was dad bet everyone in his local a pint he would have us both digging up his garden cheerfully and willingly on Christmas morning … Years later mum told us the last bit and that he never bought a drink the whole of Christmas & new year ….. revenge is a dish best served cold….. sadly no longer here and I miss a wee dram with the old goat !

—
The point of spending at Christmas is a personal choice. If you want to spend the cost of a holiday on a turkey dinner and ‘everything’, then fine, but don’t do it coldly and make sure when you lay out your annual budget you plan for the cost.

It is only as I never did, and now we have a budget, record costs and look see that I realised just how much even our modest Christmas costs. So many people get into such trouble when they do not need to. We are fortunate that whether we spend £300, £500 or £1000+ will not put us into debt. We can afford it. But that does not mean we should do it.

In the end, it is not the costs that really matter, but the memories we create with our families and friends. That one incident almost knocking on 50 years ago is fresh in my mind and one of my most cherished memories of my Christmas and my dad. Gone now 9 years. I shall be eating a mince pie, my wife drinking a sherry and I will raise a malt to him.

Happy Christmas one and all.