I started thinking about changing my car in the summer of 2019. I wrote in November of that year about how really I should consider my car as a FIRE cost. Then in July of last year I wrote again as I had seriously decided that FIRE or not, I just needed a change.

Since then, not only did I change my car, but so did her ladyship !

In July, I was considering a Volvo (XC40) and Peugeot 3008 as up on the top of the list. I liked the styling of both so when I made the decision ‘I am changing’ I started getting some test drives.

Now I had already settled on ‘Automatic Petrol’ and my first drive was a fully electric strangely enough, just to see. I did not like it that much and even a hybrid option of a 3008 was not to my liking. I dislike when taking my foot off the accelerator a palpable braking. I suppose ultimately I may get no option in 4-6 years, but I like to just gently coast down to junctions for behind traffic. Nothing hurried or sharp in braking. I dive pretty smoothly (but as I have done a fir bit of test driving, can be really really quick and hard – great to have that training, but everyday, I just cannot be bothered).

I then drove an XC40. What a bag of crap. The worst auto-box I have ever driven of any car. (I am sure others may hold a different view). Ruddy thing was constantly trying to change gear and even a small pressure on the pedal and up a gear it went.

Utter rubbish ! After 30 mins I was back and said, thanks, but no thanks.

The next car on my list was the Petrol Peugeot 3008. It has lovely styling, but what bothered me was the engine was a 1.2 and 3 cylinders. I have friend who has had one 3 years and absolutely loved it along with another friend who works at Peugeot who told me I would love it. So thought I would at least give it a go even if I naturally thought the more powerful engine would be my preference. It is a semi-SUV 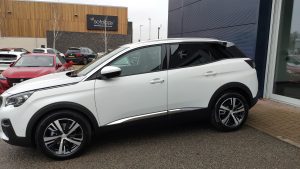 A good way to see what an auto-box will do is to set off on a straight clear road, gently get to 10-15mph then put the foot smoothly down about 2/3rd and hold it with no movement. The car will accelerate and go through the gears. What I was expecting was a little ‘jump’ on gear change. Something discernible. The XC40 was like a lead-foot going up and down. The 3008 the only indication was the gear number going up. Utter silk.

This is not to say you can’t get a gear reaction. Just put the hammer down. But I am a smooth driver and wanted something ‘easy’. As for acceleration and power, I forgot it was 3 cylinders and 1.2. No issue at all, and in sport mode can easily make the back end jump a bit on a bend…. very nice.

Top of the list … in fact, having tried a couple of the powertrains and variants, I just knew I had what I wanted…. job done… almost !

I brought her ladyship over to have a drive. Gonna be my car, but she will drive it now and again so has to be happy with it also.  Now, she was also thinking about changing her 8 year old Astra for a new Astra. Car suits her and she only does 4-5k miles a year with almost all of it crossing town to see her parents and friends.

So the conversation went:

“this is what I am thinking of getting, what do you think ?”

And just like that she comes back and says:

“forget the Astra, I want this”.

When the conversation about cost came up 10 seconds later she reverted to ‘blue-pink’ jobs … ‘money is your department …. this is what I want.. just sort it out’.

Now I am quite good with numbers and having done a little background work had in mind a cash figure up to which I would pay. In car purchases it is only the cash you pay that matters. Frankly I don’t care what trade in I get as that is an already sunk cost – just physically the notes from my pocket. I ran the numbers for the two cars and came up with a figure of £40,300.

After some negotiating with the garage I paid a total (cash) of £40,650. This reflected the higher value drop as my unfashionable old diesel got even more unfashionable 3 months on. I handed the Sales Exec a piece of paper I wrote at the start and to say they were a bit surprised at the accuracy and breakdown … and no … I did not want a job !

It gets better. We both had custom plates but her ladyship did not want to keep hers. However it did have a nice value and we sold it for £2,500 … so overall the car change cost around £2K less than I budgeted for. We have two brand new fully warranties cars with no cost liabilities in the next 4 years other than normal operation and annual garage service. I would say a pretty good place to be.

Finally, 30th Nov last year I get to pick mine up (hers was in country, mine scheduled to be built). So far in 6 weeks I have managed 242 miles .. that is lockdown for you !

So the journey has been:

…It is not that I am not decisive, but my final decision is ‘maybe’

If my Insignia had developed a major issue I would have just gone out and picked a replacement very quickly. But given the time to think, look, try, I get a car I really like and know I have no issues for the next 4 years.

So whilst I did delay as I had come to the conclusion that any maintenance cost would have been cheaper than depreciation, I really got to the point that I was fed up and wanted a change. I don’t feel I have ‘betrayed’ any FIRE principle. Life is to be lived and we don’t live an extravagant life. Circumstance changed and instead of a big pension crystallisation event (releasing a large tax free lump), I get to hold that in reserve and just just part of the inheritance.