Last year I had a look at our cost of coffee & cake. Not an inconsiderable amount with around £600 just on coffee for the year (calculated).

Well, today I was supposed to be having a flying lesson, but the weather gods have conspired to make it rather too rough .. boooh.

So what to do ? How about something really OCD like counting coffee pods used ! 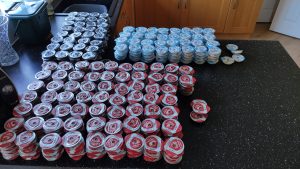 Now before anyone pegs me as really a bit touched, we keep them for a reason. We have some good friends in Norfolk who prior to CV19 we saw regularly. There is a Cat rescue place nearby who collect all sorts for recycling and strangely get rather a decent amount for used coffee pods. So we keep them and drop them off when we visit. The last time was the 2nd week of February and we have not been able to go since.

So how much have we drunk ?

I was rather surprised and thought we would have had a lot more, but seems not. The count comes in at:

Now we dropped the last lot off at the end of week 6 and we are now on week 38, so the images and count reflect 32 weeks of coffee….. yes, it is that long since we have been able to see our friends 🙁

So how does this stack up to what we were doing last October ?

Well, then I estimated 350 out of 365 days (to allow for travel where I did not have my coffee machine), but clearly we have had it. Even the two weeks wee have had away in this country we took it with us, so on a 100% basis, I estimated 2 coffee’s per day for us.

To say I am a bit surprised would be an underestimate. It felt like I have been drinking 2 or 3 a day, but clearly not, and her Ladyship has moved largely off coffee and back to a herbal tea.

Even the cake & cookie part has reduced. One effect of the CV19 lock-down has been we are trying (not hard I must say), to be a bit more healthy. That means less sugar so bang goes my cake or cookies … well .. maybe every day or two but don’t tell the wife 😉

The pods cost the same so where I would have estimated around £370 in the past 32 weeks, in reality we have spent no more than £200

The cake & cookies plan pro-rata for 32 weeks would have been around £98, but we are spending no more half that: probably around £45 in the past 32 weeks

Back in April I reflected on 4 weeks of full Covid Lockdown and what was important to us. One of the really key things was Coffee & Cake. It seemed painfully obvious how important it was to my personal moral: 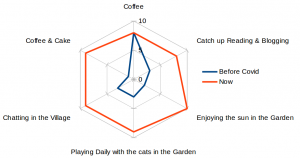 Maybe it was just my perception of what really mattered in my day. I suppose going to make a coffee, grabbing a slice of cake or some cookies was just such a deliberate act, I never really thought that I was actually drinking less and eating less. The only real things that have changed are her ladyships reduction in drinking coffee and a rather more healthy view during and post Covid.

Now if only I could make more savings in our budget like that without thinking !